PINTA MIAMI is preparing for its fifteenth edition where different projects will be presented with international curators, thus offering a space that distincts itself from other proposals and positions PINTA as an Ibero-American Fair with a global outlook.

With more than a decade as a benchmark in Latin American art for collectors, professionals, museums and institutions around the world, PINTA MIAMI is considered among the best art fairs of Miami’s art week. Having become a significant booster of Latin American artistic activities, PINTA brings together both established and emerging art agents. In this way, it consolidates a powerful stage and broadcast channel to make Latin American artists known and integrated into the international circuit.

The event will take place in December 2021 with new programmes, initiatives and the participation of international curators which ensure the excellence and visibility of Latin American art in a global context.

The fair will have four carefully articulated sections. The General section will feature modern and contemporary art exhibitors and Solo Project presents a group of individual projects specially selected by Roc Laseca and Luis Fumero. This year, in addition, the Pinta Photo section is incorporated, an area specialized in vintage and contemporary photography, as well as a novelty fourth section which will be presented from a more educational approach that will provide a new type of interaction with the public through installations and performances in relation to the history of modern art.

Extending our commitment to the visibility of Latin American art, and having presented Pinta New York and Pinta Miami, we now expand our platform for its new edition Pinta Basel in June 2022. 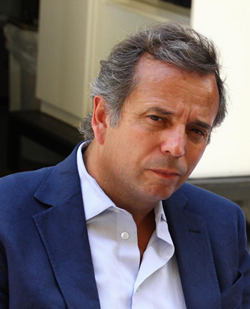 Diego Costa Peuser is a cultural manager specialized in Latin American art. In this field, he has led various initiatives that allowed the greater and better understanding of artistic creation in the region.

Diego Costa Peuser is the director of the Arte al Día International magazine, founded 41 years ago by Jorge Costa Peuser and considered a leader among the media specialized in Ibero-American art. In this way, he has contributed to the recognition of movements and developments of artistic modernity. Arte al Día International has built a unique archive of reviews, interviews, profiles and news that show the exponential growth of the artistic ecosystem in the region and the world.

As co-creator and director of influential art fairs in Buenos Aires, Lima, Miami, New York, London and, soon, Basel, Diego Costa Peuser has promoted a change in the outlook of these metropolises, epicenters of cultural activity, on the nature and historical incidence of American artists. Whether in relation to the avant-garde, as well as to current contemporary creation, the projects directed by Costa Peuser open a dialogue between different practices from the North and the South. In this sense, he has promoted re-readings of art history that have turned the recognition of transcendental works and figures.

Committed to the present, Diego Costa Peuser faces challenges with social conscience and responsibility. In 2010 he was distinguished as one of the 100 most influential Hispanics in Florida and from 2011 to 2015 he served on the Miami Board of the TECHO Foundation. For this foundation, and within the framework of Art Basel Miami Beach, he organized the ‘Art Techos’ event that brought together prominent artists in order to raise funds for the construction of houses in less favored sectors of the continent. During the Covid-19 pandemic, Diego's projects provided uninterrupted support and dissemination through innovative virtual platforms. Forward thinking and faithful to progress, the PINTA fairs will be developed in a hybrid format (virtual and in-person) to facilitate access and maximize their reach.

His work as projects and media director has been one of the factors in the growing attraction of the Ibero-American artistic language. It has crossed borders and energized the market, providing unique opportunities for all sectors and art agents.