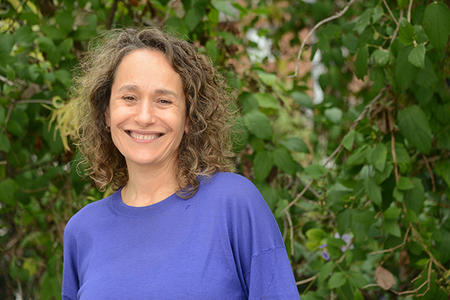 Florencia Battiti holds a BA degree of Philosophy and Letters from the University of Buenos Aires and a Postgraduate degree in Cultural Communication and Management from the Latin American Faculty of Social Sciences. At present she serves as a professor of modern and contemporary Argentine and Latin American art and  also as a curator of the Parque de la Memoria - The remembrance Park-, Where since 2000,  she runs the Public Art Program and the curatorship of the room of exhibitions in which the first samples of Bill Viola and Alfredo Jaar took place in Argentina.

She has carried out  research and curation of visual arts exhibitions in the country and abroad. She worked as assistant curator for Argentina for the First International Biennial of the End of the World, Tierra del Fuego (2007). She also performed duties  as curator of the exhibition of invited artists for the IV International Biennial of Contemporary Textile Art, World Textile Art, Buenos Aires (2009 ) and for the Nature Forecast project, exhibited at the Galeria Petronas in Kuala Lumpur, Malaysia (2008), among others.

Currently she is a Professor of Modern and Contemporary Argentine Art at the Torcuato Di Tella University.  Battiti participates regularly in conferences in the country and abroad. Her recent curatorship works  include: "Graciela Sacco. Admissible Tension "(2011) in the Memory Park; "León Ferrari. Brailles and Bible Re-readings "(2012) and" Kemble by Kemble "(2013), both at the Latin American Art Museum of Buenos Aires (MALBA);" Fernando Goin. Line of Time "(2014), “ Traces of the Real. Photographs of Juan Travnik and Jonnathan Moller "(2015) and" Political Poetics "(2016) in the Park of Memory.

As a member of the Editorial Board of Public Art Dialogue, a publication specialized in public art, edited by Routledge, Taylor & Francis Group. In 2012, she published "Between the Brush and the Underwood. Kenneth Kemble, art critic of the Buenos Aires Herald ", a book on the work of Kemble as an art critic during the 60s and 70s.  Also, she has partic a jury in numerous contests and awards, among the most recent: Salón Nacional (2011); Klemm Award (2012); "Buenos Aires and Justice" and Braque Award (2014) and (2016). Between 2014 and 2015 she worked as editor of the fascicles on "Argentine Painters" edited by the newspaper La Nación.

She has participated in works clinics for artists in the programs endorsed by the National Fund of Arts, Entrecampos Regional and Boomerang. Since 2012 she has implemented the "Federal Contemporary Art Program" promoted by the arteBA Foundation. In 2013, she obtained the Trabucco Scholarship with a research project on the irruption of memory in Argentine art during the 1990s.

In 2016 she won the Radio France Internationale and Radio Cultura Award for the Promotion of Arts-Public Management Category / Institutions for the Curatorial Program of the Memory Park. She is currently Vice President of the Argentine and International Association of Art Critics and serves as an advisor for BIENALSUR, Biennial of Contemporary Art in Latin America promoted by the National University of Tres de Febrero (UNTREF).