Venezuelan artist Nan González will present a video installation that is both monumental and sheltered. The pieces in it, Alma de Glaciar (Glacier Soul) and Titanes de Hielo (Ice Titans) were designed as an immersive experience for visitors that aim to address the interconnectedness of nature’s elements and the butterfly effect of human endeavor. Using water as a leitmotif, González installation and Suazo’s curatorship raise awareness about global warming and the loss of biodiversity; two of the most pressing matters that Miami faces.

Martín Touzón, for his part, exhibits Affective Pulse (2021). This light installation, composed of several neon pieces that are chained together, reacts to the presence of the viewer, triggering a sensory response that floods the space. At a time when distance between humans is a prophylactic resource, proximity reminds us of the significance of physical interaction and how necessary we are to each other.

In a similar way, Venezuelan-American Lisu Vega’s textile site-specific installation serves as a bridge between ancestral techniques and contemporary experimentation. By intersecting fashion, graphic design and fine art, Vega also explores sustainability and, in doing so, underlines the relevance of memory and emotion in the exploration of contemporaneity.

"Her proposal is inserted in an ancient tradition that conceives life as a weave, where the subject is adrift on an unknown causality." describes Félix Suazo, the installation’s curator. "An analogy between strings, roots and veins originates there; these are elements that not only keep a morphological similarity, but also suppose a vital connection". 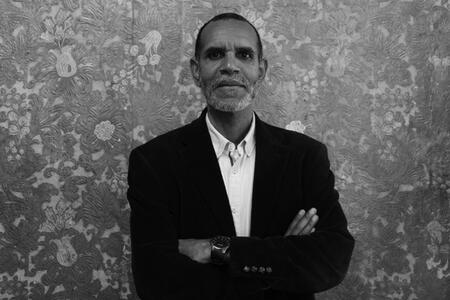 Nan González studied art, photography and film in Caracas, London and Cannes between 1974 and 1980. Throughout her career she has been interested in performance, video art and installation, media she has used to reflect on the body, nature and time. Between 1979 and 1986 she developed a series of performances and installations in creative partnership with Jennifer Hackshaw under the pseudonym Yeni and Nan. Among her major solo exhibitions are El vuelo del cristal and El proceso de un pensamiento, Museo de Bellas Artes, Caracas (1991), Titanes de Hielo, Museo de Bellas Artes, Caracas (2005), Guardianes, Centro de Arte los Galpones, Caracas (2014) and Tramas del tiempo, Sala TAC, Caracas (2019).

Martín Touzón (b. Argentina, 1985) completed the Artists Program at the Universidad Torcuato Di Tella, after graduating with a degree in Economics from the same institution in 2013. He participated in several solo and group exhibitions in Argentina, Canada, Cuba, Italy and Uruguay, among other countries.

His work is part of private collections in Germany, Argentina, Austria, Spain, United States, El Salvador, England, Italy and in the public collection of La Rural in Argentina.

Lisu Vega (b. Miami, 1980) is an artist and fashion designer. She studied at the Julio Árraga and Neptalí Rincón art schools in Maracaibo, Venezuela, and her academic training in Experimental Graphic has allowed her to work with different possibilities of printing on paper and fabric as well. Since 1999, when she started her exhibition journey, her work has been enriched by the use of recycled ropes, found materials, poly silk, and some other textile materials.

As a multidisciplinary artist and current member of the Miami-based Laundromat Art Space Residency Program, Vega’s work explores the emotions we associate with memories. By combining her knowledge of ancient weaving techniques passed down through her Wayuu heritage, with years spent in the experimental graphic design and fashion industries, Vega bridges the gap between handmade and digital media in her work. The constant exploration of recycled materials has enabled her to define her pieces in terms of sustainability while examining the relevance of traditional processes in the context of contemporary art.